Learning the Guitar: FAQ for Beginners

Thinking about learning how to play guitar? I’m sure you have a lot of questions. Here are the answers to some of the most common questions I’m asked as a guitar teacher.

Is guitar hard to learn?

The short answer is it depends on what you want to play. If you only want to strum a few chords to go with your singing, then no, learning guitar is not hard. If you want to rip into some crazy solos or play complicated music, then yes guitar can be hard to learn.

Anything new can feel hard. Learning guitar is like learning anything else new. At first, you won’t understand what you’re doing, it will feel awkward and you’ll get frustrated. But if learning guitar is something you want to do, you’ll push past the difficult parts.

Learning guitar gets easier the more you practice and if you’re committed, you’ll end up with something enjoyable to play.

Is acoustic or electric guitar harder? 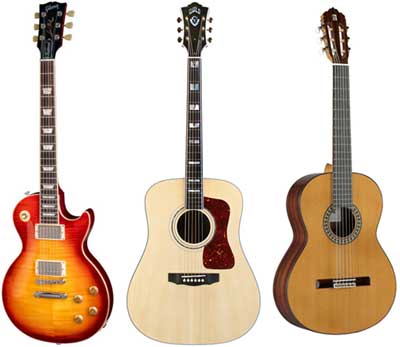 Don’t worry about which guitar might be harder to play because that’s the wrong question to ask. What matters is what type of music you want to learn.

No in both cases. It depends completely on the music you want to learn.

Should I learn on an electric or acoustic guitar?

The guitar you get as a beginner should match the style of music you want to learn.

What is a good guitar for a beginner?

The best guitar for a beginner is one that makes you excited to pick it up and play. Let’s look at a story to understand why.

Imagine a 10-year-old boy  who wants to learn some classic AC DC songs and rock out like Angus Young below:

He begs his parents to buy him a guitar and for his birthday he finally gets one. He unwraps a massive box to reveal this:

What do you think is going to happen?

The first words out of his mouth will likely be “that’s not an Angus guitar!”.

That’s the worst possible guitar for him because it doesn’t match his goals. You can’t rock out to AC DC on a classical guitar. He needs an electric guitar and an amp so he can get that rock tone and feel. The right guitar will motivate him to practice. The above guitar won’t.

The point of the above story is that the right guitar for you depends on what you want to learn. If you’ve read through the other answers above, you’ll get the feeling that I’m repeating myself here. But it’s that important to get right. I’ve seen so many students give up over the years because they bought or were given the wrong guitar.

If you’re looking for a recommendation on the ‘best beginner guitar’, stop looking for it. There isn’t one. The best guitar for a beginner is the one that makes them excited to pick it up and practice.

For some beginners, the best guitar is a classical guitar. For others, it’s a big steel string acoustic and for someone like me, it was an electric guitar. Pick a guitar that suits your style and music preferences.

How long does it take to learn how to play the guitar?

If you listen to advertisements for guitar courses, it takes “30 days to become a guitar god!”.

Of course, that’s a lie.

What about the 10,000 hours rule stating that it takes 10,000 hours of practice to become an expert at something?

Well, that’s not true either.

There’s no simple answer to this question. The answer for you won’t be 30 days and it certainly won’t be 10,000 hours.

The time it takes for you to learn the guitar depends on how often you practice and what music you want to learn.

For example, let’s say you only want to strum basic chords so you can accompany your singing and you practice every day. In that case, you can learn everything you need within a couple of months. You’ll keep improving over time, learn new chords and different strumming patterns, but it won’t take you long to learn what you need.

As a different example, let’s say you want to learn how to play songs by one of my guitar heroes: Steve Vai. He plays incredibly complicated music. It will likely take years of hard work to get to the point where you can learn one of his songs at a basic level. Then it can take decades to push your skills to the point where you can play his music perfectly (or close to perfect).

Does that mean you should give up on your goal if the music you want to play will take you learns to master? Of course not. You’ll learn a lot of great music and enjoy yourself along the way.

Am I too old to learn guitar?

The oldest student I’ve taught so far started his first lesson when he was in his 60s. He had never played before and decided to learn guitar as a way to keep his mind active as he started retirement.

He was able to become a very well rounded guitarist because he practiced consistently and never used his age as an excuse. I never once heard him say “I’m too old to learn that” and that’s why he succeeded.

If you currently feel you’re too old to learn guitar, I highly recommend reading the book Mindset by Carol Dweck. If it doesn’t change your mind, then don’t even bother trying to learn guitar because you’ll only give up and blame it on your age.

What if I’m a left-brain person or I don’t have any musical talent?

A lot of people want to learn guitar but don’t feel they could learn it even if they tried.

Maybe you think you’re a ‘left brain’ person so you can’t learn something creative like the guitar. What if nobody in your family has musical talent? Does that mean all hope is lost for you?

It might surprise you to hear this, but the left-brain-right-brain thing is a myth. That image to the right looks compelling, but it’s a lie. It’s been debunked over and over and over. People still believe it because it gives a convenient excuse.

If you want to learn guitar, you can learn it.

Being a ‘left-brain person’ isn’t a good excuse. Neither is not having any talent.

In the last 15 years as a guitar teacher, I’ve never seen evidence of natural talent. Every single student starts off at ground zero. Everybody sucks when they start learning guitar and that’s fine. Jimi Hendrix sucked when he first picked up a guitar.

If you want to learn guitar, you don’t need any talent. You need to practice. No excuses.